How an Extreme Rebrand Had Such a Dramatic Effect

Revolution Four is a strong brand, clearly defined across digital and traditional media and echoed within our offices. As a marketing agency, the brand oozes creativity, technical prowess and left field thinking, which has led to client wins both in the UK and internationally plus a few awards along the way.

However, a little over five years ago it was a very different story. Justine and I had been working for my first company Laird Assessors, concentrating on marketing strategies and building a strong online brand presence.

Working in Whitfield Business Hub with numerous other companies, we had started to get a reputation for building good websites and creating interesting graphic design work. Companies within the business centre initially and then beyond asked us to do projects for them. To keep this work separate we set up a limited company, predominantly as a financial vehicle. With no need for a brand, we simply named the company based on the office, Whitfield Business Support Ltd.

We continued for a couple of years and our business grew steadily. There was no plan, strategy or goal, not much in the way of branding or marketing; it was very much a side line reactive to incoming work.

At the end of 2017 Justine and I attended a tech conference in the Baltic Triangle, the heart of tech and creativity in Liverpool.  Alongside us were cutting edge tech companies, creative agencies and some bigwigs from business and government. 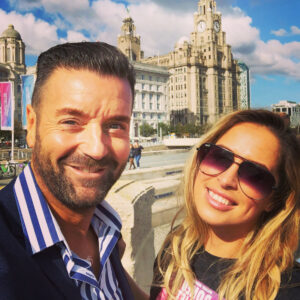 Many of the start up companies had cool names and sharp branding, which made our long and boring name sound like we made fax machines or photocopiers. There and then Justine and I decided we needed to come up with a new name which suited our style better.

A name is bloody hard thing to come up with. You’ve got to come up with something that encompasses your culture, product, ideals but then it can’t be taken already, plus it has to be available as a domain name. What we thought would take a couple of days grew into a few months, several brainstorming sessions, often late into the night with the creative benefits of wine and tequila.

About 250 names later, including Mamma Media (we’re both big ABBA fans) Apocolipstick, Lady Blurred, Miss Chief Media we finally came up with Revolution Four for several reasons. We’ve entered the fourth industrial revolution as AI, robotics and quantum computing are changing industries worldwide. We’re quite revolutionary ourselves, often going against the grain, challenging conventions – lot’s of people say they think outside the box; we haven’t even seen our box for years! We offer a full 360 revolution service, from an initial strategy then integration and action through to the final analytics of a campaign. Four because the two of us together are twice as good. Okay the last one perhaps a touch contrived.

The Branding Behind the Name

Once the name was founded, the branding came together quickly. We chose colours to exude excitement, positivity, creativity, warmth, strength and graphics to showcase our abilities, with modern design with a nod to the third industrial era. I’m obsessed with consistent branding, so we ensured everything from our website to our shop front, our social media to our stationery, was branded according to our strict brand guidelines.

The effect that this had was unexpected and dramatic. After all the company was still producing the same products, just dressed differently. We saw a marked escalation in traffic to our site and a significant increase in conversions to sales. The branding had changed the perception of our company from one that might sell paper clips to a cutting edge digital marketing agency.

Even with a good background in marketing Justine and I were overwhelmed by the effect of the rebrand. It took a lot of hard work, but meant that as a company we could run thereafter more efficiently, with more sales conversions. 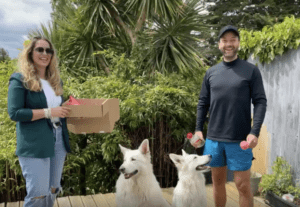 That was two years ago and we would really have liked to celebrate our second birthday together, with friends and clients, and a glass or three of champagne. Instead we had a Zoom conference with home made tequila sunrises.

What this process taught us was the incredible power of a brand. The importance of getting the physiology of colours, fonts, image, attitude and all those undefinable aspects that goes into creating a company image.