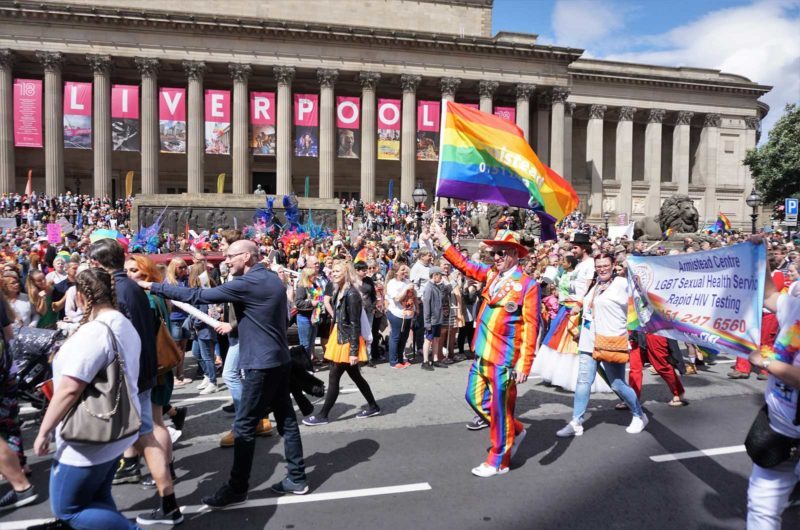 Liverpool transformed into ‘Somewhere over the Rainbow’ this weekend as Pride 2019 came to town.

The Revolution Four team have been working hard over the past month creating some stunning Pride graphics for a number of our clients.

We are delighted to see the age of diversity and inclusivity really take prominence in local business and there is nothing we love more than injecting a bit of colour into people’s lives!

If we could wear rainbow outfits all year round, we would.

Last year’s Pride event attracted more than 50,000 people to the city, and as this year marks 50 years since the Stonewall uprising in New York, a record number of attendees flooded the city with colour.

In 1969 – a number of violent raids on LGBT+ associated businesses in New York led to spontaneous peaceful demonstrations against police in the Greenwich Village area of Manhattan.

Since then, Pride parades across the world have reminded people how important it is to stand up for who you are.

The theme of this year’s Pride celebration in Liverpool was fitted to that message, launched with a #ComeAsYouAre campaign encouraging visitors to be as loud and proud as they can be.

Unfortunately, it’s hard to ignore the fact that homophobic attacks have been on the rise for the past few years. Organisers behind the Liverpool City Region Pride Foundation wanted to make sure that the city’s LGBT+ community, allies and supporters know it has never been more important to come together and shout down hatred.

A week of heatwaves and tropical storms didn’t deter any of the twelve thousand who turned up at Liverpool Pride 2019 to show support for the LGBT+ Community.

Starting early on Saturday morning, both our human and canine members of Rev4 assembled on the steps of St. Georges Hall for the annual Liverpool Pride March.

Just before the rainbow parade set off on it’s route through the City, the official Pre-March Muster brought a moment of solidarity to the thousands of eager revellers.

It provided time to remember what Pride means, and why it is still so important in 2019.

With words from Pride organisers, local charities and councillors, the Muster was the perfect motivation to take to the streets and march in solidarity with the LGBT+ community.

The Pride March route took in all the beauty of Liverpool City Centre, showcasing the incredible businesses and organisations supporting the Liverpool City Region Pride Foundation.

From Primark to Barclays, there wasn’t a single shop front in the City that hadn’t been covered in rainbows! Even passing through the business districts of Exchange Street and Moorfields it was still clear to see the support was unfaltering.

Finishing up in front of the main stage on Pall Mall – it was time to really get the party started!

Keeping the original format of the Liverpool Pride festival in mind, two stages headed up either end of Tithebarn Street, including a new Showcase Stage in partnership with the Liverpool International Music Festival.

Some of the headline acts included Little Boots and Saara Alto of X Factor fame.

There were also sensational performances from House of Suarez, a globally renowned dance troupe known for their show-stopping Balls.

The fun continued (late) into Saturday night and continued again on Sunday with Liverpool Pride ‘Sundae’ activities across the City – highlights including a Drag Breakfast at the Hilton.

Revolution Four is so proud of everyone who attended and we hope you had a fantastic day.

We can’t wait to see what other exciting events Liverpool Pride have planned for the future.