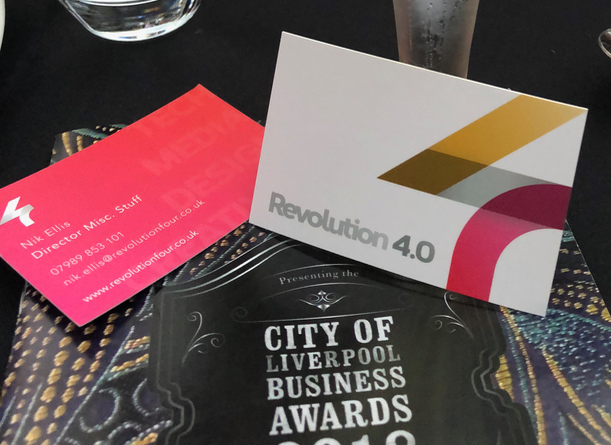 Absolutely delighted to announce that we’ve been nominated for the Social Media Manager of the year in the City of Liverpool Business Awards, organised by Downtown in Business.

The sixteenth annual awards will take place on the evening of Thursday 4th July at the stunning Sefton Park Palm House. The gala dinner celebrates the best of Liverpool business. The Revolution Four team will be attending again this year.

We need your help to win though.  We’d be so grateful if you could take 2 minutes to vote for us in the ‘Social Media Manager of the Year’ award category here: Downtown in Business

Many thanks for all your help & support.

About Downtown in Busines

Practical ways to grow with digital marketing in 2021

Previous Post
Women in Business Awards 2019 Triumph for Revolution Four
Next Post
Business Challenge: What Can You Do with a Fiver?
Menu

“If you love what you do, you’ll never work a day in your life”

My passion for work is more than just an excuse “to get by”. I am always looking at how I can gain more from life and work. Obtaining as much experience and knowledge across the board and within different departments is what excites me each day.

With the support of the incredible squad at Revolution Four, I am able to push myself outside of my comfort zones and dive into new ventures with the team along the way.

Rev4 Unplugged host by day dancer by night, that’s right. For years I have been professionally dancing abroad in the likes of Egypt, Cyprus, Turkey and Spain. My love for presenting began while working in Turkey where I became host to children’s Saturday morning TV style show ‘Live & Loud’. I have brought my presenting skills with me to the Rev4 Unplugged podcasts which I hope you will enjoy listening to as much as I had fun hosting!

Being in the office and having office bants makes coming in to work not feel like work at all! Especially when I have my fur baby Bella with me who I’m sure you will have all seen our Instagram!

Looking forward to seeing what the future holds. I have lots of exciting ideas which I can’t wait to share with you all.

“When you do things right, people won’t be sure you’ve done anything at all”

I started doing IT from the time I left school in 2015, since then I have worked to improve my skills to provide the highest level of technical support and provide high quality technical solutions.

At Revolution Four my main focus is providing technical support to our internal teams and to our clients, as well as assisting with planning, and implementing new IT solutions for the business.

I’ve been doing design now for over 10 years and professionally since 2015. I’ve had the opportunity to grow and develop as a designer and have always pushed for the best!

Being a graphic designer constantly improves my attention to detail, allowing me to always keep up to date with the current trends!

Having a wonderful team around me; including the doggos, helps keep me focused.

I Joined Revolution Four on an Apprenticeship program after I finished sixth form where I got a Level 4 Distinction* in IT. In 2020 I completed my apprenticeship provided by the BCS and I am a qualified IT Infrastructure technician.

At Revolution Four I look after our webserver, email account setups and issues, and I take care of both in house and client tech problems. Anything ranging from an issue with dropbox to a smashed laptop.

“If you’re going to stand out, be outstanding”

Started my first company in my spare bedroom back in 2000 and managed to grow it to an industry-leading national firm. With a love of technology, I diversified into software followed by tech-centric B2B companies after realising I had a knack of enhancing businesses. Passionate about inspiring creative and dynamic people to realise their potential and push boundaries.

Spotted an incredible talent in a colleague so asked her to help me set up a marketing agency different to all the frustrating other ones. Justine & I have recently invested in our fourth company after several thousand air miles, a tonne of blood, sweat and tears, more margaritas than are good for us; we’ve developed into a dynamic, challenging and formidable force daring to create a better world.

Revolution Four is one of those companies whose products put a big smile on client’s faces by mixing imagination, free thinking and a shed load of creativity with today’s technology. I don’t go to work, I just develop awesome shit with friends.

Me in Four Words: Energetic, innovative, unconventional, questioner, why only four?

“If your dreams don’t scare you, you need to dream bigger.”

A graphic designer by trade, wandered into the world of hospitality. Worked my way up in the industry from front of house to opening 3 restaurants successfully dabbling in design throughout. The sense of adventure took over and catapulted me across the world as Cabin Crew for British Airways.

After a stark reality check surrounding lifestyle and funding it I scurried back home and grasped the opportunity of a design job with an enthusiastic and driven individual, my now business partner and best friend.

Within six months we opened our first business (this one) and now I am lucky enough to be Director of four very different companies, experiencing first hand all the trials and tribulations, something of which I am passionate about sharing and supporting businesses with now. It’s been a busy, testing but inspiring experience and a gift that just keeps on giving. Who knows what else may be on our agenda…

Since starting my career in 2013 my focus has been centred around different forms of marketing and design. I began with social media and now I’m a web designer.

“In the quest to deliver excellent customer service, never say no. Even if you know it can’t be done.”

The bulk of my career was as air crew for British Airways. I’ve always had a passion for delivering excellent customer service and that is one of my biggest strengths.

I work with the team at Rev 4 on a daily basis, looking after clients on arrival. They are a great team and offer me the flexibility to pursue other things outside of the company.

“One small, positive thought in the morning can change your whole day.”

After graduating in 2014, I worked within the digital marketing industry for three years, predominantly focusing on search engine optimisation. I now work within the first impressions team here at Revolution Four.

There’s never a dull moment working with my colleagues in the first impressions team.

“Be the change you wish to see in the world.”

My background is like a rainbow, with many colours to my bow. I have absolutely loved the experience I have gained from working with so many different industries, hospitality being the main one. I am passionate about supporting businesses especially the independents and SMEs.

Revolution Four allows me to be myself and supports my ideas which allows me to create a unique and personal feel to our offices and the clients who come to visit.